Degradation of color in films

Through time, a discoloration of one of the primary colors may occur on films. Red, blue, green dominant colors, or a general desaturation of colors can be seen, which also reduces the overall contrast of image.
This type of deterioration, which is progressive and relentless, makes it impossible to enjoy the film in its original colors, with almost monochrome images or with completely staggered colors.

To preserve these films, there are two different approaches:

1- Make a physical copy of the film on a new film at a specialized laboratory, restoring an acceptable colorimetry with photochemical procedures, but the costs are high and not justifiable for family films or films with little historical and/or artistic value.

2- Make a cine film transfer (telecine film transfer) “frame by frame” of the film, with the advantage of being able to meet any requirement, at varying costs that are proportionate to the type of work.

This is the standard procedure:
The film is thoroughly cleaned with a solvent to remove any surface dirt. Film transfer is performed by varying the brightness of the RGB LED units, to obtain the best instrumentally possible colorimetry, i.e. colors closer to reality. Usually, it is possible to obtain an acceptable/good and sometimes very good result, depending on the brand and type of film used to make the movie or copy print and from the degradation level.

There are films where colors are washed out in a different way. In that case, actions should be targeted by carefully calibrating the film scanner by groups of scenes or even scene by scene. Then, postproduction starts, using the “DaVinci Resolve” software, which is used to try and optimize all colors to bring the film as close as possible to its original condition. Processing of a 30-minute film may involve up to a month work.

Following is possible to appreciate: “Original Film” that represent the film as it delivered to us. Notice a cyan dominant and a significant general reduction in the contrast.
“Restored Film” is the  transfer of the same film, using all the techniques described in the “standard procedure”.

The recommendation is always the same, the sooner action is taken with the transfer into digital, the lower the costs, and the better the results. Waiting aggravates the damage to the film and always involves a lower level result and an increase in costs. 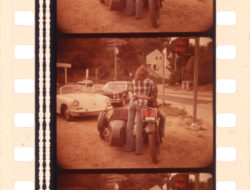 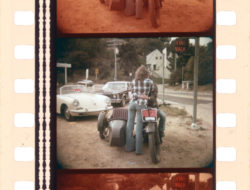 The vinegar syndrome is a chemical irreversible degenerative process that alters cellulose triacetate film supports. In the first stage, the support decomposes and liberates acetic acid, which accumulates in the box that contains the film and accelerates the reaction producing more acid. In the second stage, the film begins to deform and shrink. The film becomes stiffer and the emulsion begins to detach from the support forming flakes and fragments. The film tends to curl and with time it becomes unrecoverable. The vinegar syndrome can affect any film format: 8mm, Super 8mm, 9.5mm, 16mm, and 35mm.

The vinegar syndrome occurs mainly on older and badly kept films (in hot and humid locations). When one realizes about this phenomenon, a buffer solution consists of putting molecular sieves sachets, which absorb acetic acid, in the boxes containing the films. The degenerative process slows down, but unfortunately it does not stop. It is recommended to keep films in cool and dry places.

For films at the first stage, recovery is possible by printing the film on another film or by running cine film transfer (telecine), which saves the content. The following digital restoration will return a still usable and excellent quality film.

For films at the second stage, it is much more difficult and expensive. The only chance to try and save them is to make cine film transfer  frame by frame as soon as possible, trying to obtain still acceptable images with a subsequent thorough and long digital restoration. 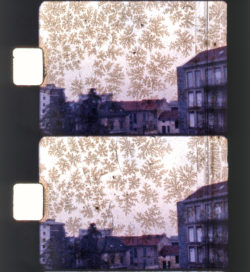 Film with the Molds and Fungi

Unfortunately, as it is possible to see in example, due to poor storage in humid location, some colonies of mold are gradually covering the film. Soon, they will join together and completely cover the emulsion. The result will be total loss of images. To control this proliferation there are chemical treatments to be performed in addition to storage in a cool and dry environment. When films are in these conditions, they may be cleaned with specific products and immediately proceed to cine film transfer, but the end result will still show signs of degradation.